Dave Wallace, of Wright City, Mo and owner of DMW Roofing is a 40 year veteran of the roofing trade. He’s also a local guy so he knows a lot of his neighbors.

He’s run a popular and growing company for many years but the pandemic was raging throughout 2020 and it hit his business hard. Sales were currently off around 35%. And suddenly Dave found his retail roof repair and replacement business dependent on shared leads from the big lead brokerage.

He began searching for a better way to do things when he stumbled on the book written by Top Ranked Roofer.com founder, Scott A Dennison that encouraged him to pursue “positioning” as a solution to his issue.

In early February of 2021, after a detailed analysis showed where he was struggling, he entered into an agreement for VPS Total Transformation of his online marketing.

Some Of The Problems We Found –

Our analysis of his existing website showed that it had numerous problems. There were issues with the content (both quantity of content and duplicate content issues), with site speed, and with the mobile readiness of the site.

Instead of being fast as search engines prefer, his site loaded slowly; as a result Google did not have them ranked for any of their major keywords.

There were countless issues with his Google My Business profile, starting with access to even work on it. They really only appear in the 3-pack of local listings when the search comes in from nearby.

The client also was not running any Google Advertising campaigns. Instead he was buying shared leads (non-exclusive to him) and working hard to build value with those homeowners he did get to meet with.

The Solution We Provided –

Once we were clear on what his goals were, we set about our first task of learning from Dave himself and in his own voice what he felt made his company better and unique. Our brilliant copywriting team turned his words into powerful copy that tells clients why he’s better than his competitors.

Dave and his team went to work on capturing and sharing pictures of their work that really shows what they are excellent at.

Images of the client’s projects were then combined with copy that sounds as if the client wrote it himself into our proprietary, high-converting roofing contractors website design.

All of his Google My Business access issues were resolved and two existing profiles, each with reviews he wanted to keep, were merged earning favor with Google for eliminating duplication. Our goal is to make it likely we’ll earn our place in the local 3-pack for maximum visibility in the local market.

The underlying “citations” to his local online marketing were cleaned up to ensure that all NAP (name, address, phone) info was correct and consistent everywhere. We then added 50 new citations to strengthen his local online ranking.

4 Days after he signed his agreement, his new site was delivered to Dave and his team. At that point we began to build an aggressive Google Advertising campaign for him to turn his marketing assets into highly qualified local leads calling about his services.

Within the first 8 days we had generated 7 leads that yielded 3 repair jobs and a 20 square full roof replacement job. It was at that point the client called and told me that the profits on those jobs were enough for him to recover his entire investment in the project so far.

But our model involves us advertising and tweaking and tuning things regularly to establish 3 key numbers about a campaign. We want to understand the true cost per lead (CPL), the verifiable cost per sale (CPA) and ultimately the return on ad spend (ROAS).

The below image shows his campaign at the end of 3 months so you can see we’ve helped him to accomplish his major goal of generating his own leads. He’s now positioned in the St Louis marketplace and growing again as he was working to do. 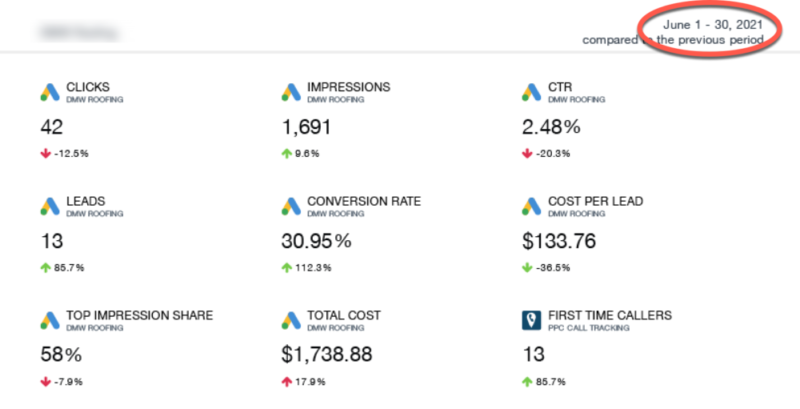 If your roofing business needs some help with its online marketing, you should know we have a long history of helping our contractor friends to achieve the success they’re after.

We’re a little picky in whom we work with but we will talk to you about your goals and see if it’s a fit. Just contact us here and we’ll do our best to help you too.

Those still doing this have a built in reason to move very slowly and accomplish very little.

My income comes from helping people get results quickly so we don't waste your time and you don't spend too much.