Exclusive Roofing Leads, Tire-kickers and Everyone in Between

I’ve been researching the roofing sales market a lot lately.

There is a trend toward the use of the term “exclusive roofing leads”, which looks a lot like other roofing leads trends in the past few years.

Maybe you’ve even chased this idea some. If so, hit reply and tell me what you’ve found.

The very idea of exclusivity in what has been a shared leads environment tells me that the hustlers and dealmakers are about to fatten up (again).

Contractors are sufficiently confused by the marketer’s terms and typically, in this scenario, they get taken advantage of and abused.

The Truth About Exclusive Roofing Leads

Maybe I can offer you some truth and with it, you can avoid getting burned by those who are deeply focused on their own profits, and not so much on yours.

One bit of truth is that homeowners who seek a third-party firm to provide them with qualified roofers are looking mostly for the lowest price.

The best prospects in any market are those who know they need help and then look at individual firms until they find one they feel they know, like and trust.

But, for context,  this topic actually started as a call with a former client that took place in 2017. The call came one day in August from a roofing partner of mine in Fort Collins, CO who had received 70 exclusive roofing leads from his efforts that month.

However, instead of being happy, he was very upset. He insisted that none of the leads were any good. In fact, “they were ALL TIRE KICKERS.”

An interesting expression to be sure but let’s make sure we are defining the terms the same. The term “Tire Kicker” is commonly defined as: “A tire-kicker is someone who will drag the sales cycle on…and on…and on while hogging your time and resources without ever actually buying.”

An Endless Sales Cycle or A Weak Sales Rep?

To be sure there are homeowners who will play this role… but is it accurate to say that of the 70 homes who searched for roofing services, none of them were serious?

What are the odds of that?

What happened, technically speaking, is this… a homeowner discovers an issue that might be caused by a leaking roof. That person picks up their phone, tablet or laptop to search for service providers in the area.

They see your ad there and are attracted to its message so they click on it. Then they read the landing page and choose to either complete the roof inspection request form there or the call the local number on the page and inquire.

Next, the roofing company receives the request and either calls or emails the prospect to discuss next steps.

Here’s a question for you. If that was your scenario, would you suggest that this homeowner is calling roofers to waste your time? Are they calling to waste their own?

Why Don’t Our Prospects Buy From Us?

If the customer doesn’t buy from you, how sure are you it’s their fault?

I’d suggest that when your ads have people calling your phone number, that these are NOT tire-kickers; instead they are highly interested prospects. But you’re going to have to sell them on your company.

Which leads me to two more topics – both subjects for longer posts here soon.

1) In our customer polling, we’ve found a clear connection between a homeowner who needs a roofer but refuses to engage with YOUR COMPANY, and the first impression they have of you.

My interpretation of that is as many as 80-90% of homeowners who need help from a roofer will see your marketing and choose another company. Ouch.

2) Over the years I rarely have pushed back on contractors who claim to sell 50-75% of their leads. I let them say it and then own their estimated closing prowess. But as of now, I’d say that the number is lower.

In most cases much lower. An associate of mine went into the sales field with a contractor recently — a guy who claims to sell consistently 35% of his appointments. In reality, under some casual inspection, he closes closer to 18%…

And he’s still successful. When we continue this discussion, either later this week or early next week, we’ll talk more about the impression people have of your business and the things you’ll need to do to change it.

Until then, click here and get your copy of this custom “first impressions” report done just for you.

The Truth About Free Roofing Leads

Looking For Roofing Leads? Here’s How To Avoid Getting Burned…

Why would you pay for roof leads when you can generate leads for FREE?

About Scott A. Dennison

I'm known as an Internet Marketing Expert and Lead Generation Specialist for the roofing industry.

I'm the author of two books; The best-selling “80/20 Internet Lead Generation," as well as Becoming Top Ranked - A Guide For Roofers. I've created several online training courses, and have presented at marketing conferences all over the US.

I specialize in helping roofing companies achieve their #1 online goal, to make their phone ring with quality leads – and to achieve their personal life passions. 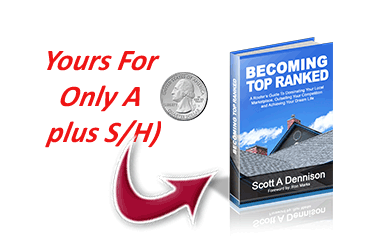 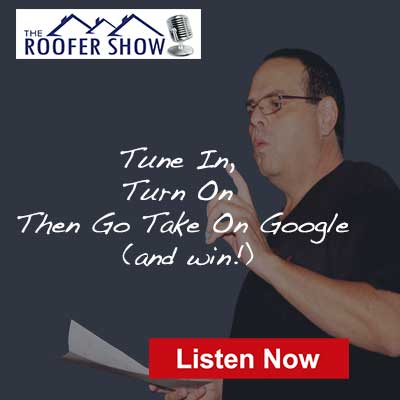